Walbrook to Williamsburg: two London born archaeologists with a shared past and present.

In August 2016, I flew back from Washington, following a visit to Ivor Noël Hume and Carol his wife in Williamsburg, Virginia.

This was my fourth such visit since 2007, and provided another opportunity, for two London born archaeologists, to talk about their shared past and present. I first made contact with Noel, back in 2001, following the discovery of the Roman bucket chains in three massive wells on 20-30 Gresham Street (Blossoms Inn) and 12 Arthur Street in the City of London. 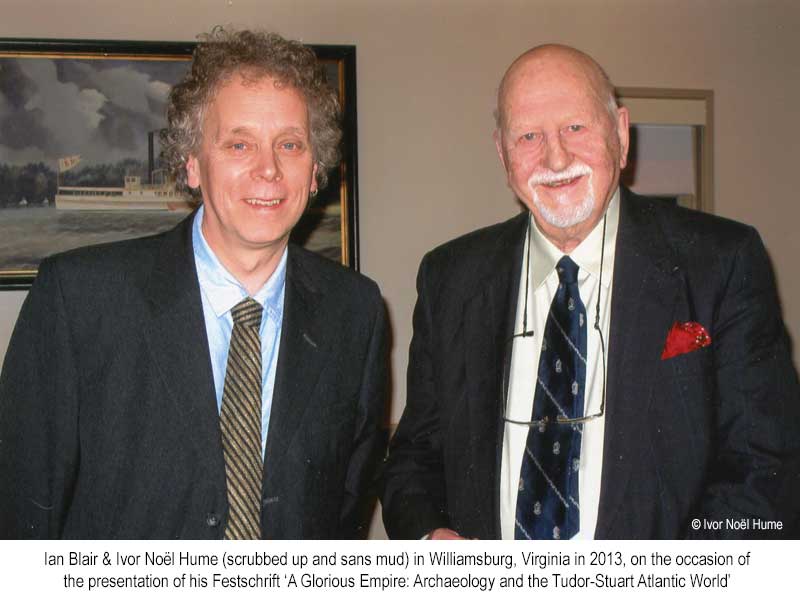 Some fifty years earlier in 1955, Noel had discovered the first incomplete water boxes in a similarly outsize well on the Cheapside Roman bathhouse site, which although preserved in the finds archive, remained unrecognised, until the discovery of the better preserved examples in 2001. Unbeknownst to him, he was clearly a bit of a magnet for Roman bucket chains, having worked on all the sites where they were subsequently found, during his tenure as the Guildhall Museum field archaeologist from 1949–1957, before sailing off to the New World to direct the excavations in Colonial Williamsburg. 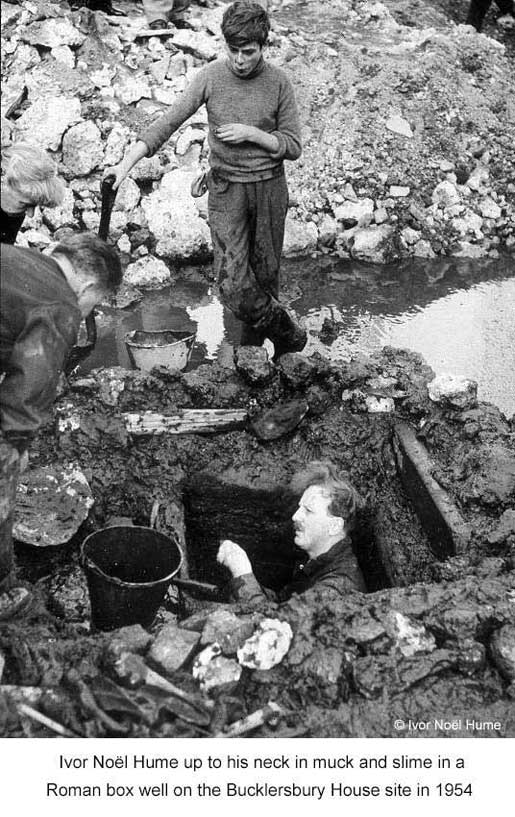 Following the discovery of the Roman wells and the remains of their mechanical bucket chains, our thoughts turned to trying to contact Noel, although estimations of his age (based upon an assumption that he was hopefully still with us!) varied widely: from eighty plus years, to something approaching the nine hundred and sixty nine years that Methuselah had reportedly lived to. In the event, I was very happy to discover, that Noel (by then retired from Colonial Williamsburg) was still very much with us, and he was able to do a piece to camera on his visit to London the following year, when the Roman water boxes from all three sites, were brought together for the first time during filming for a Time Team Special. 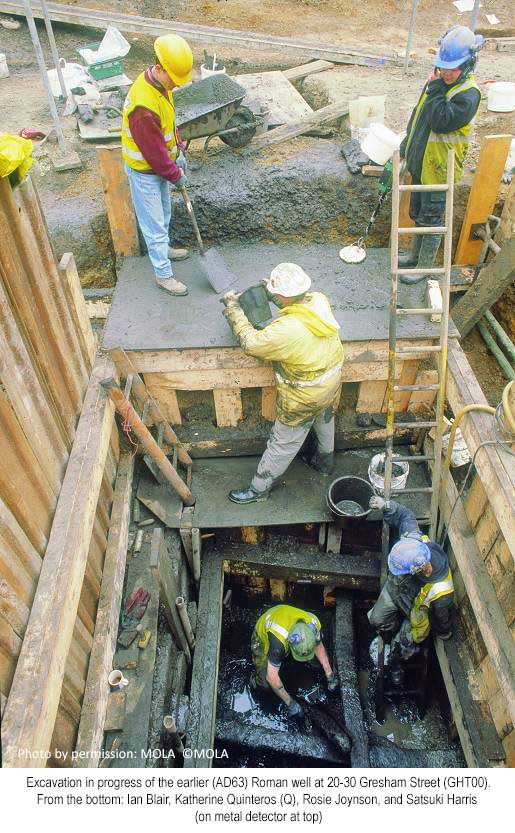 In the intervening years, we as archaeologists, continue to ‘walk in his footsteps’ and progressively have revisited more and more of his former sites. Whilst, we habitually bemoan the lack of resources and time, as compared to Noel’s experiences working in the Blitzed ruins of the City of London after World War Two, they are as nothing. Armed with little more than a handful of tools, a tape or two, and a broken camera, his only assistants were a small number of volunteers, who he remembers fondly as the ‘Guildhall Irregulars’.

He succinctly described his experiences, in ‘Into the Jaws of Death…Walked One’, published in LAMAS Special Paper No 2 in 1978, which I would recommend reading. Noel is an incredibly gifted author, and a fantastic wordsmith, and has written over twenty books on widely differing subjects, together with countless articles, and has busily ensconced himself in his daily routine of writing. I would give a lot, to have a fraction of his talent with words, as he writes beautifully, and eloquently.

Whilst our friendship has continued to grow over the years, our regret is that a very large stretch of water separates our respective worlds and that in the absence of a viable time machine, that we never had the chance to work on a site together. But London archaeologists will always be inexorably bonded by the profession we have chosen, and the small pieces that each one of us has been able to contribute, will ultimately be our collective legacy.

For the record, Noel will be Eighty Nine years old on the 30th September!