The photo below was taken on the Billingsgate Market excavation in 1982, when His Royal Highness Prince Charles visited the site. To my knowledge, it marks the only royal visit to an on-going archaeological excavation in London in living memory. Prince Charles was perhaps not a surprising choice to be invited to the site, given that he had read anthropology, archaeology, and history, at Trinity College, Cambridge.

Seeing this image again, reminded me of a story related to his visit, that I felt it only right to resurrect to prove that it is not an urban myth, passed down over the intervening decades by mischievous archaeologists. My firm belief is that there is no smoke without fire, and hopefully through this post, the truth will out.

In the photo, site supervisor Steve Roskams (right) is seen giving Prince Charles a tour of the site. To his left is Brian Hobley (Chief Urban Archaeologist of the DUA) busy rootling around in a grubby finds bag, with a disinterested looking Jez Reeve? standing behind him. The key element that I would like to draw your attention to, are the pristine shiny pair of wellington boots, that the heir apparent to the British throne is wearing, these can be usefully contrasted to those that Steve and Brian are wearing, with Brian’s left boot seemingly having suffered a catastrophic puncture. 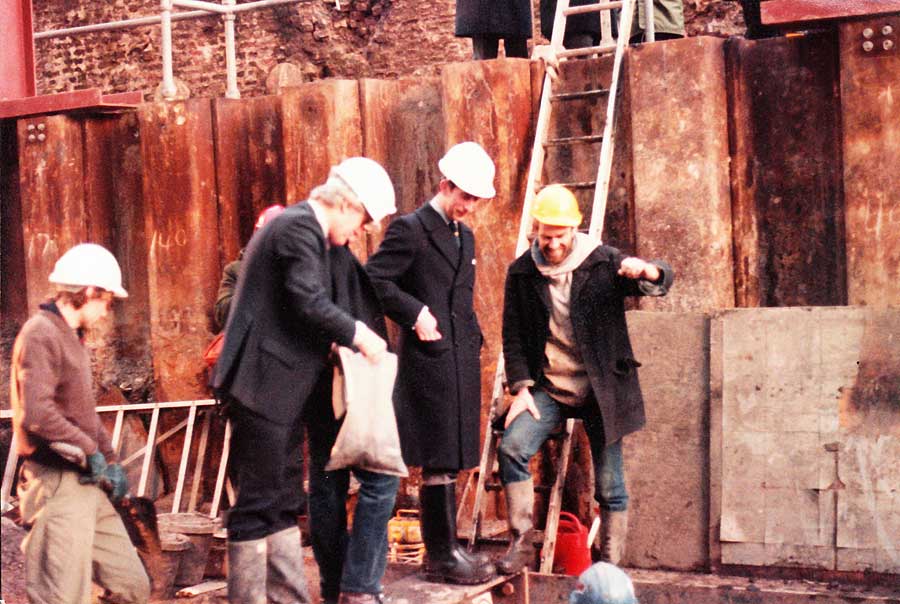 Photograph sent to us by Gill Scarlett (Craddock)

Given it is highly improbable that the royal visitor wore these boots in the back of the car from Buckingham Palace, it is my understanding that they were purchased in advance and were therefore waiting for His Royal Highness to jump into on his arrival at the site. With the site tour at an end, it is my belief that he then changed out of them, leaving them on site, before heading off for the Palace, or onward to another engagement.

Throughout the course of the Billingsgate excavation John Schofield (DUA Field Officer), was also de facto fixer for the project, who busied himself on a multitude of tasks anything from assembling cup-lock scaffolding barriers around the edges of the excavation, to acting as banksman when the site cabins were being craned into place, as captured on the Oscar nominated Chronicle documentary (see below).

In the days and weeks after the royal visit, word went around the archaeologists, that the aforenamed DUA Field Officer had acquisitioned the ‘as-new’ royal wellies, and that some form of sweepstake or draw was to take place to have a chance to win them. Suffice it to say that this never happened! So, what became of them? My own belief is that to this day, John wears them either whilst gardening, or perhaps more likely, and to keep them in pristine condition, he only puts them on whilst watching episodes of the ‘Crown’ (season 4) on television, cursing the fact that the Billingsgate excavation never figured, and the role he played in this intrigue never acknowledged.

Postscript: Coincidentally, whilst composing this post and looking at a DUA Radio Carbon newsletter (dated March 1980), I found reference made to the fact that JS has size 8½ half feet. Now I wonder if anyone happens to know what size feet His Royal Highness has?

To watch BBC Chronicle now, click  ‘On the Waterfront’

RETURN TO THE PREVIOUS PAGE