One of the largest projects undertaken by MoLAS in 1996–97, was the excavation of the site of Lloyd’s Register of Shipping, 71 Fenchurch Street. 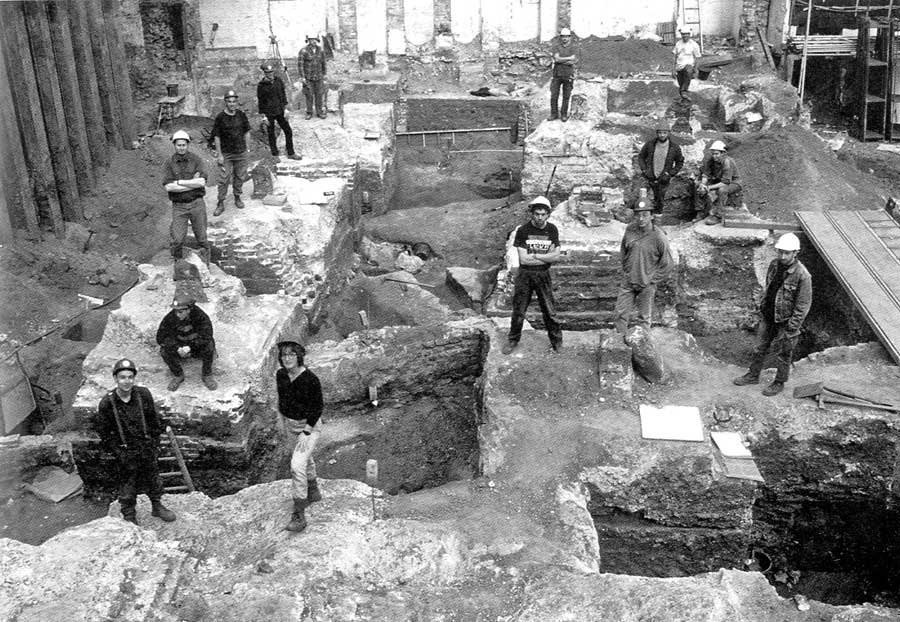 The new development retained the existing ‘registry’ at 68–71 Fenchurch Street; a lavishly decorated 1901 building designed by the Victorian architect Thomas Edward Collcutt, who also designed the Savoy Hotel and the Wigmore Hall.

At the heart of the new development are two glass and steel towers designed by Richard Rogers, which typically wear their components on the outside, with the main lifts and stairs on view at the front behind full-height glazing. Given the size of the towers, I was surprised to find, on a recent wander into the enclosed courtyard in front of them, that they are surprisingly well concealed by the main frontages, which effectively wrap around them like an exoskeleton.

The Lloyd’s Register excavation was notable for the large variety of Roman buildings it contained within its footprint, including a number of substantial stone buildings constructed after the Hadrianic fire, including some with sunken rooms, painted plaster and unusual decoration. Realigned, mid 3rd-century AD masonry buildings included suites of heated rooms and timber outbuildings. Significantly, this is in marked contrast to the recently completed excavation at 80 Fenchurch Street a mere 60m to the east, where an altogether more rustic approach to building was adopted, with not a single Roman masonry building being identified.

Twenty years on, I still have a reminder of the Lloyd’s Register site in my garden, in the shape of a sizeable Roman tile or ‘lydion brick’, one of a large number that weren’t retained when the masonry buildings and tile drains had been dismantled and sampled. I hope that prior to any archaeological investigations, in the gardens of properties once inhabited by London archaeologists a hundred years or more from now, that a review has been undertaken of the census returns to determine the occupation of the former occupants, so that history doesn’t get rewritten in a small way.