‘I attach the photo of Bruce, Marie (Nally) and myself at Leadenhall Court, taken in July 1986 by Queta Kaye, a friend of Hester White. I have a framed copy in my living room and gave a copy to Bruce. Spot the lobster and starfish on the right lapel of Bruce’s jacket!!’ 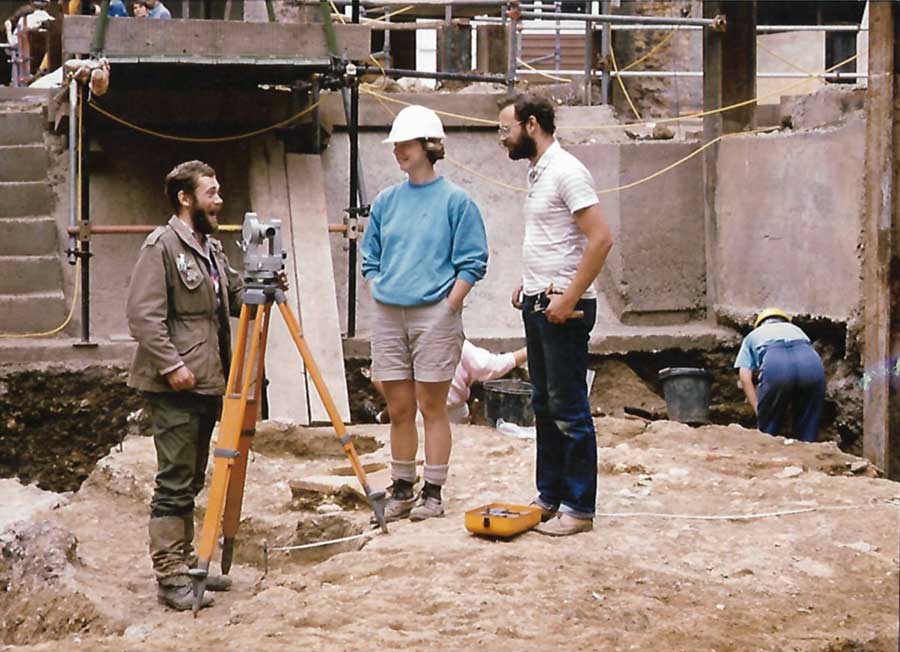 Thinking back on three of these elements: Leadenhall Court, Bruce, and junk costume jewellery, brought to my mind the following anecdote:
My lasting recollection of Bruce at Leadenhall Court, was at the end of site party. In those days and for the next two decades, he was habitually attired in a green combat jacket festooned with a collection of clothes pegs attached to the epaulettes, supplemented by a diverse assortment of cheap costume jewellery pinned to its front.

Bruce arrived at the party at some point during the evening, having had a swift drink or six in a local hostelry on the way, clutching a full bottle of (I believe) vodka, which he then proceeded to almost single-handedly drink for the rest of the evening. The inevitable result was that at a point around midnight, and with no warning or chance to shout ‘Timber’, Bruce’s eyes suddenly glazed-over before falling as stiff as a board to the floor on the same arcing trajectory as a felled redwood tree. The impact was such that almost every clothes peg and piece of junk jewellery on his jacket went spiralling into the air, and such was the size of the assemblage, that we were still picking individual items up several days later.

So, what do you do with a dead man? It took three of us to lift a completely comatose Bruce off the floor, still completely rigid (but I guess if you were to look for a slight positive, a bit lighter for the loss of the paraphernalia from his jacket). If ever you have had to lift someone in this state you will know that the human body appears to simply turn to lead and Bruce at that point in time seemed to weigh about the same as a small elephant. We called an ambulance which duly arrived and took him off to St Bartholomew's Hospital, where I believe he spent the night having some of the excess alcohol siphoned off, before being discharged in the morning following a sound ticking-off from the staff nurse. For some reason, I always envisage a Hattie Jacques style matronly figure from a Carry On film wagging her figure sternly at Bruce, but then these were genuinely different times.

I am not quite sure what Bruce has got attached to the bottom of his trousers in the Leadenhall Court photo, but I do not believe that it was a fashion accessory that ever caught on, even in the 1980s!

Matron (Hattie Jacques) admonishes Bruce for being a very silly boy, prior to his discharge from Barts Hospital the morning after the Leadenhall Court party