The Three Wise Men of Gotham

Three wise men of Gotham,
They went to sea in a bowl,
And if the bowl had been stronger
My song would have been longer.

‘Wise man of Gotham’ Ryszard Bartkowiak, with commemorative mug found in the moat at Low Hall 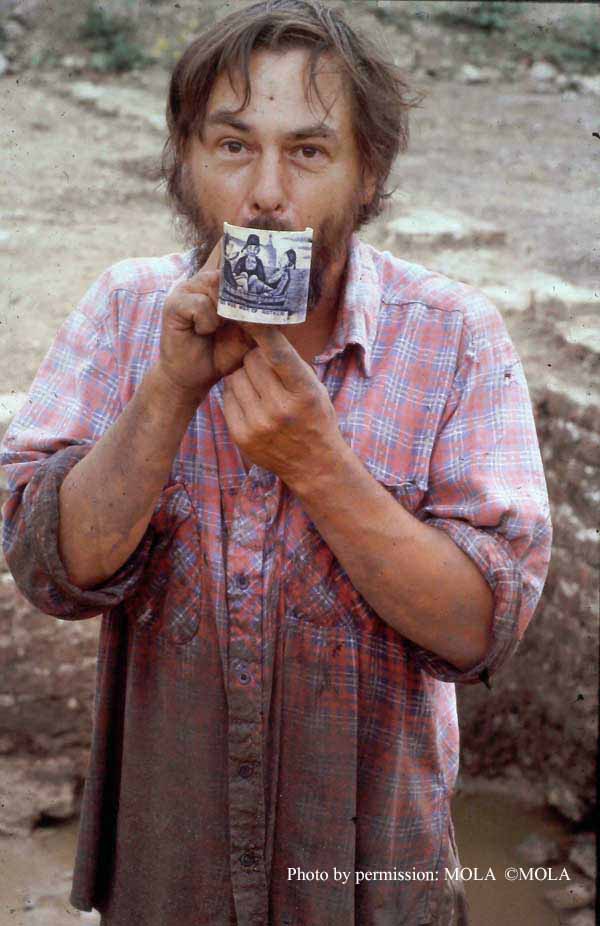 Almost twenty years have passed, since the excavation at Low Hall Depot Walthamstow (WS-LH97) in the summer of 1997, and the site of the fantastically preserved moated medieval manor house of Low Hall, and the much smaller post medieval farmhouse complex that was to follow it. The site was ideally located, as living in E17 it afforded me a leisurely ten minute stroll to and from work. Over the past decade or more, Walthamstow has attracted a large number of archaeologists who now call it home. As I write this, I realise that there is scope for more than one post related to the site, so this opening shot across the bows will be the first, with others to follow.

Given the large size of the site, it is hard to believe that only seven archaeologists were involved in its excavation, who collectively toiled for nine weeks through a mix of torrential rain, and blazing sunshine of a typical English summer. With a small but happy team, and sole occupancy of the site, it was al fresco archaeology at its finest, and a rare opportunity for most of us to give our legs a rare airing. Spirits were further lifted by the presence of ‘Kaya’ (Chris Pickard’s faithful hound) and I feel that every archaeological site would benefit from the presence of a dog to boost morale. 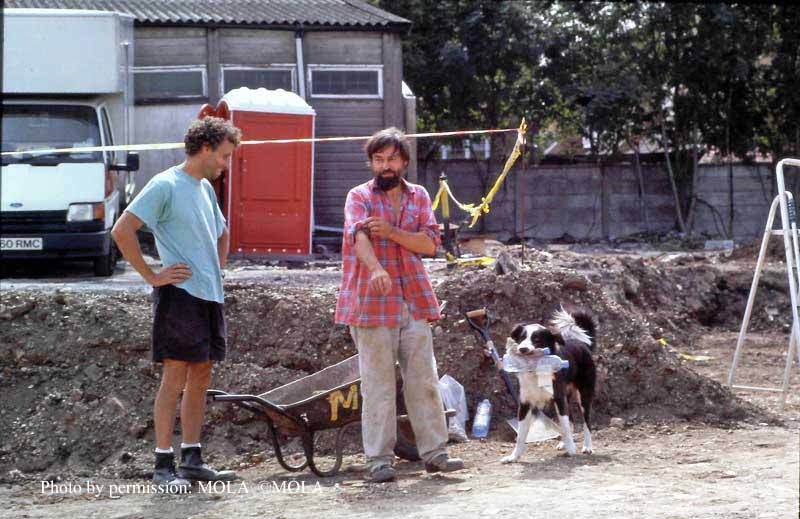 Most of the limited work in the area of the moat adjoining the medieval bridge abutment and gatehouse was undertaken during a short watching brief at the end of the excavation, by which time a pump had been acquired, enabling the well-preserved base frame of the medieval bridge to be revealed. It will be readily apparent, from the sequence of photos that follow, that they pre-date the arrival of the aforementioned water-sucking device. 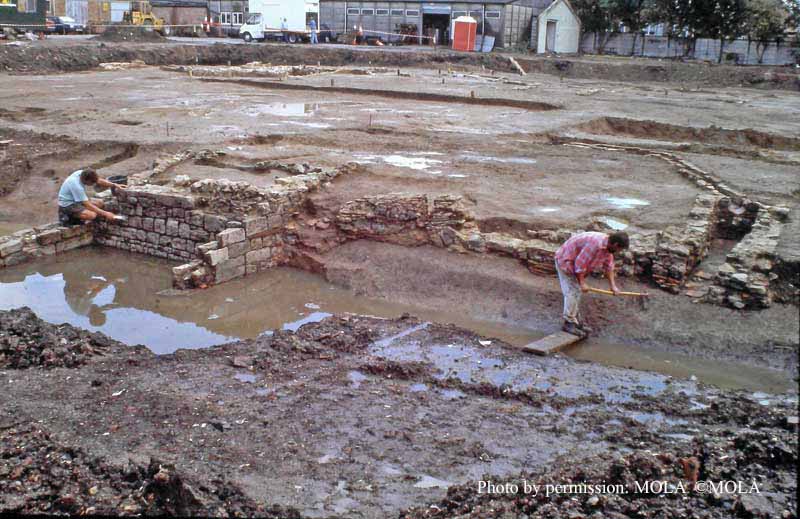 Scene 1: Two wise men of Gotham (Ryszard Bartkowiak and Ian Blair) photo-cleaning the medieval bridge abutment and the moat side wall of the adjoining gatehouse. 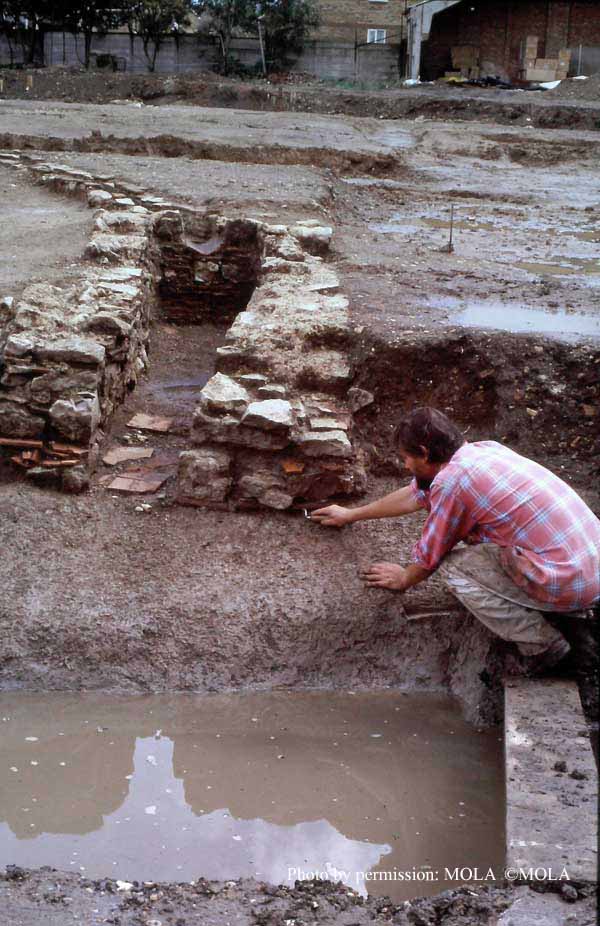 Scene 2: Wise man of Gotham perched on narrow board over water: ‘I have an idea, as to the easiest way to reach those difficult to clean areas close to the waterline’ . 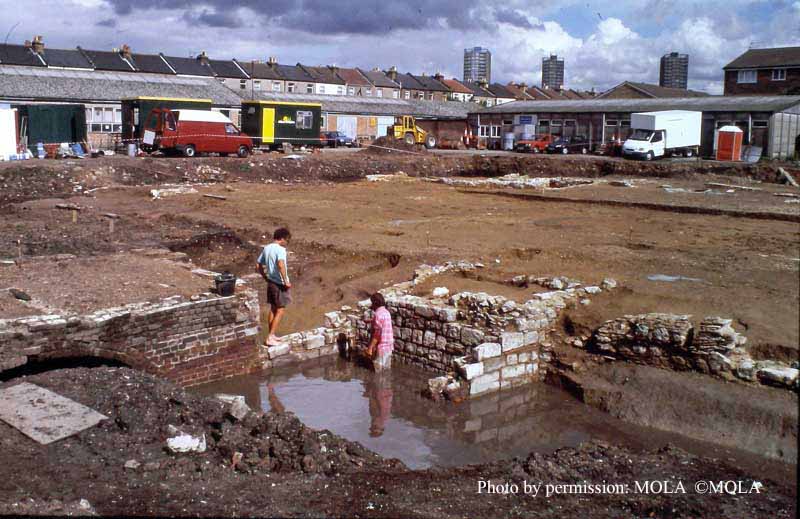 Scene 3: Wise man of Gotham (somewhat predictably now in the moat and still fully clothed): ‘ Come on in, it’s lovely, at least if you ignore the freezing temperature of the water around your nether regions, and the likely contaminants’. 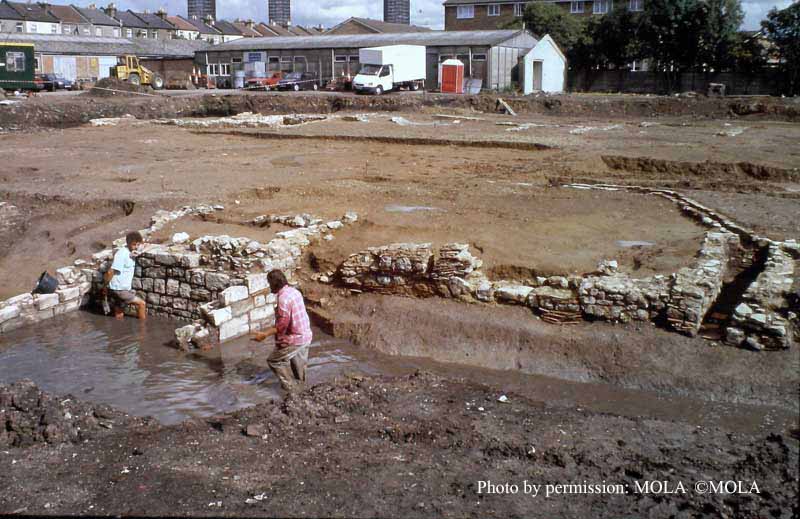 Scene 4: If you can’t beat them, join them: ‘Two wise men of Gotham standing in the moat’. 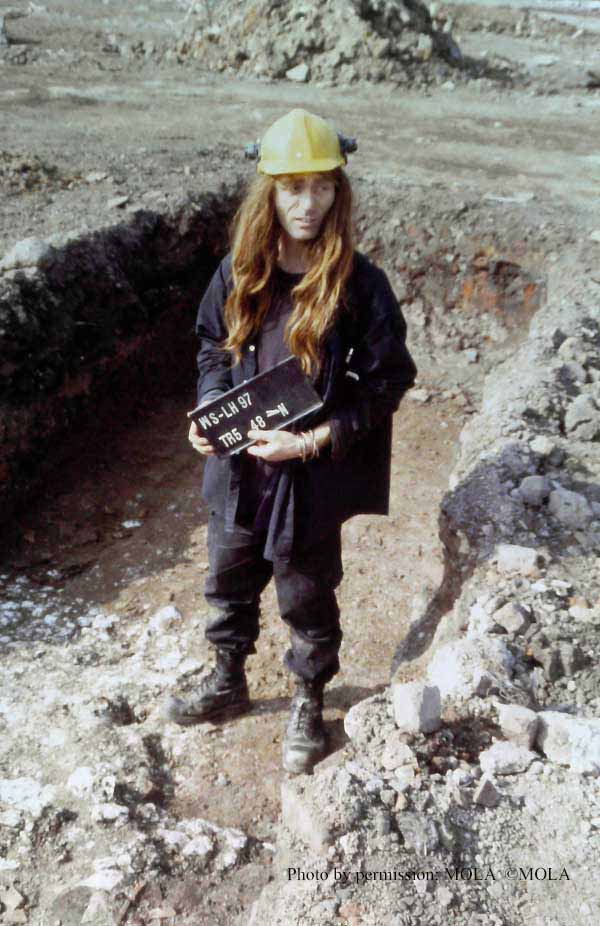 Scene 5: But you might ask: ‘Where is the third wise man of Gotham ?’ ‘Wise man of Gotham’ Paul Thrale, who worked on the original evaluation in March 1997, is still occasionally sighted around Walthamstow, clutching his retro photo board, and asking passers-by if they can point him in a northerly direction.