Almost twenty years on from its discovery on the Monument House site (BPL95) in 1998, the Roman culvert with its access or drop shaft, remains the best preserved example to have been found in the City of London.

The structure was accessible for a length of 20m and incorporated three plank-lined silt traps, the largest being below the shaft at its north end. To be able to enter and work within a fully intact subterranean Roman structure constructed 1,800 years earlier, was a memorable, if slightly constrictive experience. 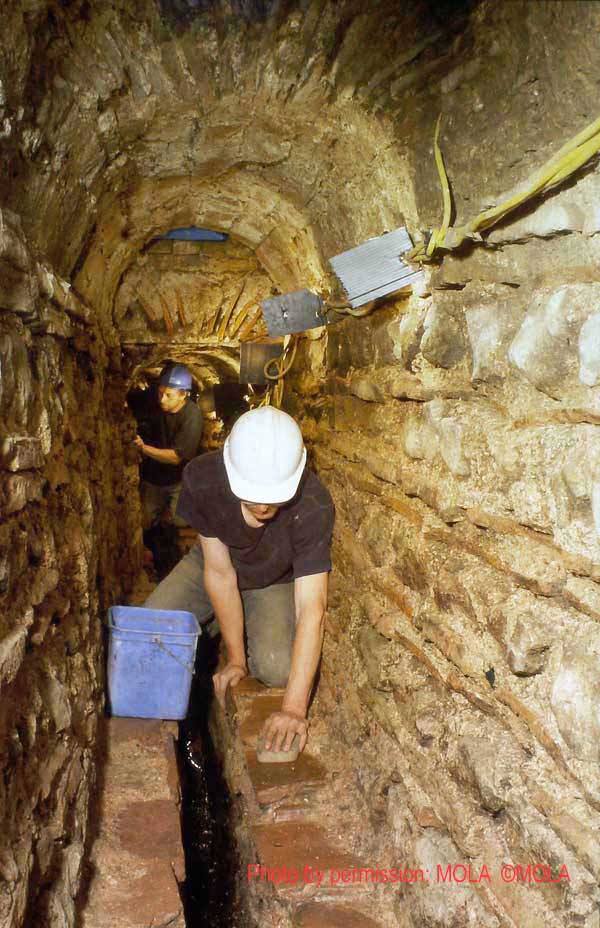 The practicalities of excavating the culvert posed a few previously un-encountered logistical issues. Because the structure was completely enclosed, the spoil could only be brought out in one direction, with buckets being passed (Great Escape style) through the legs of the forward excavator, to someone behind, who then had to drag them back along the culvert. Obviously, the further into the structure we went, the more onerous this process became. On a more positive note, with the exception of two areas beneath breaches in the vault roof, made during the medieval period, the majority of the culvert was largely free of spoil, apart from around 0.50m of silting that had accumulated along its base. 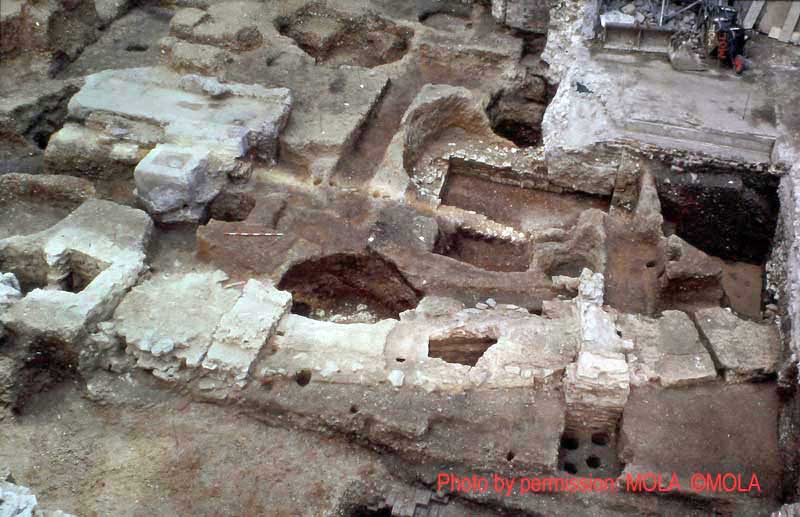 The Roman culvert with its square access or drop shaft at its upper end (looking east).

On the completion of the excavation and recording of the culvert, a detailed Penmap survey of the inside of the structure was undertaken by Steve Every and Duncan Lees. Their efforts in surveying the restricted confines of the culvert is especially impressive, as Duncan, acting as prism monkey complete with a torch, painstakingly edged his way southwards through the structure, with Steve logging the selected points as he went. On a historical note, Duncan was the only archaeologist to access the extreme south end of the culvert, although the canary in the cage he was carrying, unfortunately didn’t survive, having been overcome by fumes. 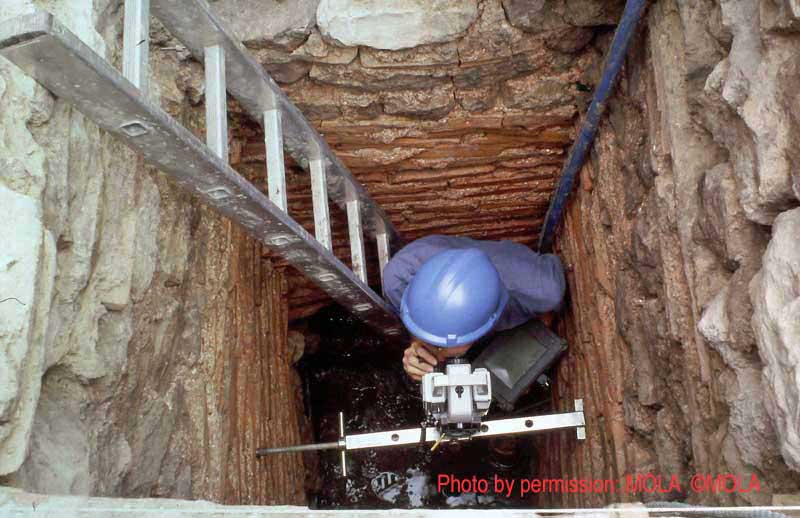 Steve Every surveying the north end of the culvert from the access shaft, Duncan Lees is out of shot in the darkness. 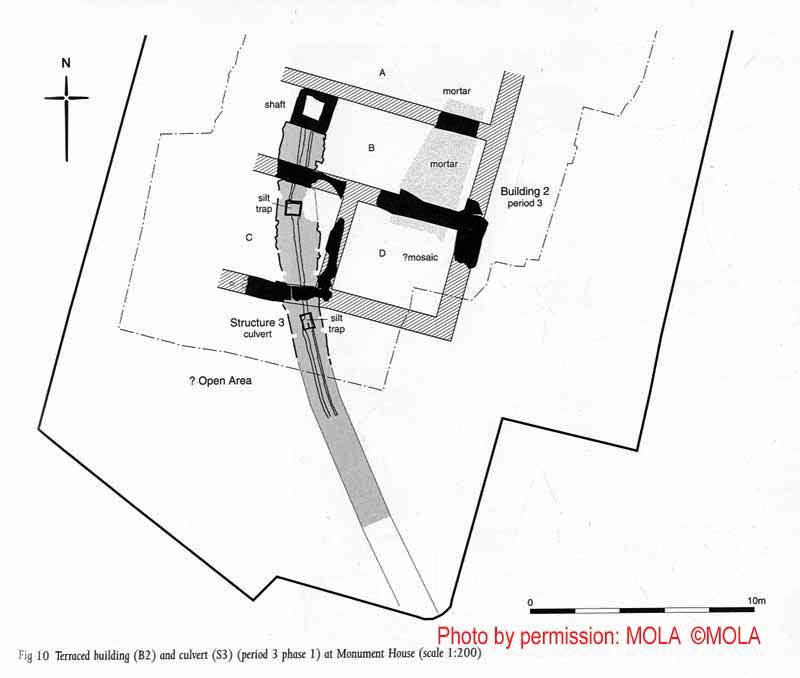 Monument House: plan of terrace building (B2) and culvert (S3). The Open Area at the bottom is ‘One Tree Park’ over the north side of the former Upper burial ground of St Botolph Billingsgate.

The aforementioned south end of the culvert, extended beneath ‘One Tree Park’, or to be more precise: ‘No Tree Park’, located outside the footprint of the development. This open area was formerly the site of the Upper burial ground of St Botolph Billingsgate opened in 1392, and survived largely undeveloped into the nineteenth century. We can count ourselves fortunate, that the gravediggers didn’t fully breach the culvert, as I have no doubt that if they had, it would have been utilised as a handy (if somewhat unconventional, narrow, and overly long) ready-made burial vault, and we would have found it stuffed full of bodies.
Given the importance and rarity of the Roman culvert, a decision was taken to preserve the entire structure in situ. To this end, the base of the culvert was lined with geotextile before the structure was backfilled with sand, with the upper section finally being tightly packed with sandbags to support the roof vault. Prior to its infilling, a Time Capsule (in a blue environmental sample tub) was hastily thrown together by the archaeological team. Its contents included: a list of staff who worked on the site, assorted news items on the culvert, colour photo of the culvert, copy of the Guardian newspaper, a brick from a cellar destroyed in the Great Fire, book of results from the 1998 World Cup (which was won by France), countless coins thrown in as loose change, a Coke can, and at least one store loyalty card, thrown in by Blanchills attendant Martin ‘Noddy’ Bowman. 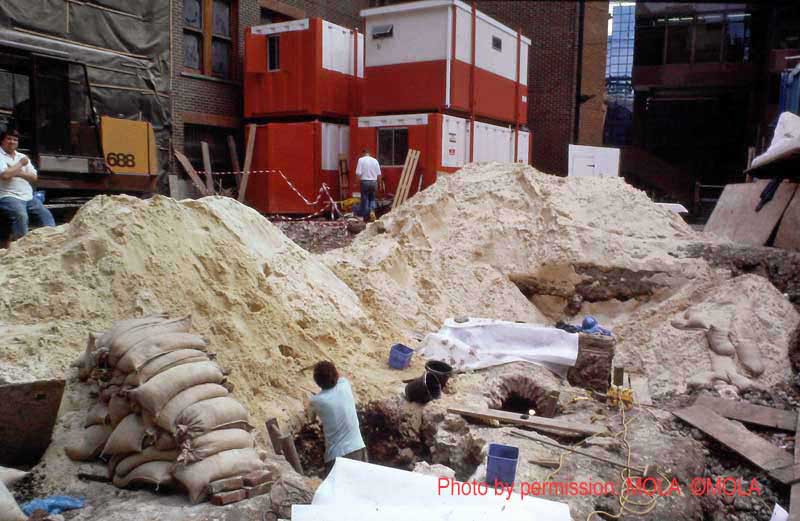 Life’s a beach! Five lorry loads of sand and a considerable amount of effort later, the culvert and shaft were finally backfilled and consolidated.

The time capsule was placed in the culvert at a spot beneath the north side of One Tree Park on 23rd July 1998, with a scribbled note on its lid: (BPL95) Time Capsule – Buried 23/07/1998 (will probably be dug up in two weeks’ time!). My pessimistic prediction didn’t come to pass, as eighteen years, nine months, and twelve days (or 6861 days) later it is still there :–): the enigma of a 20th century time capsule in an early 3rd century Roman culvert. 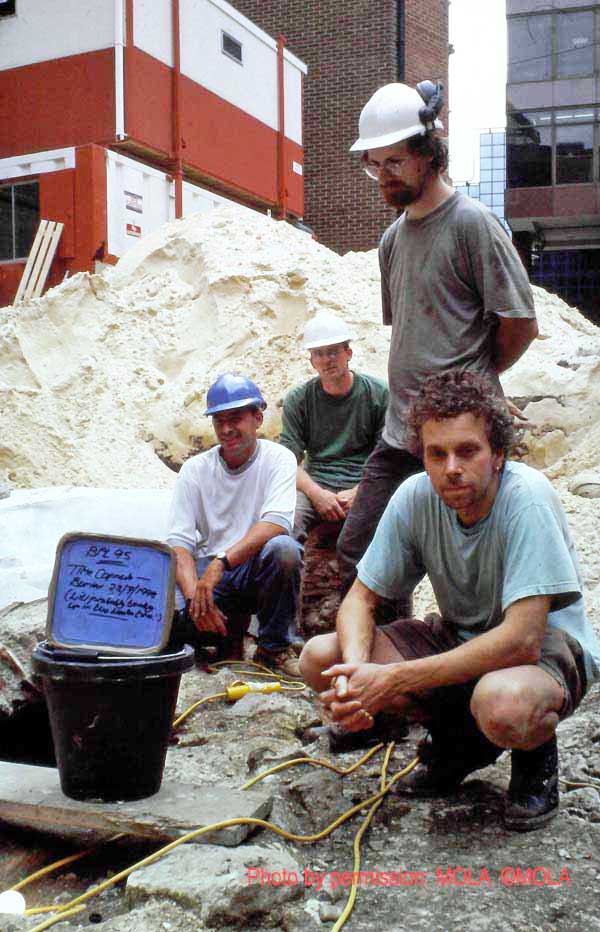 The time capsule with some of the team (from left to right): Gerald Palmer (Blanchills attendant), Dave Mackie, John Minkin, and Ian Blair. 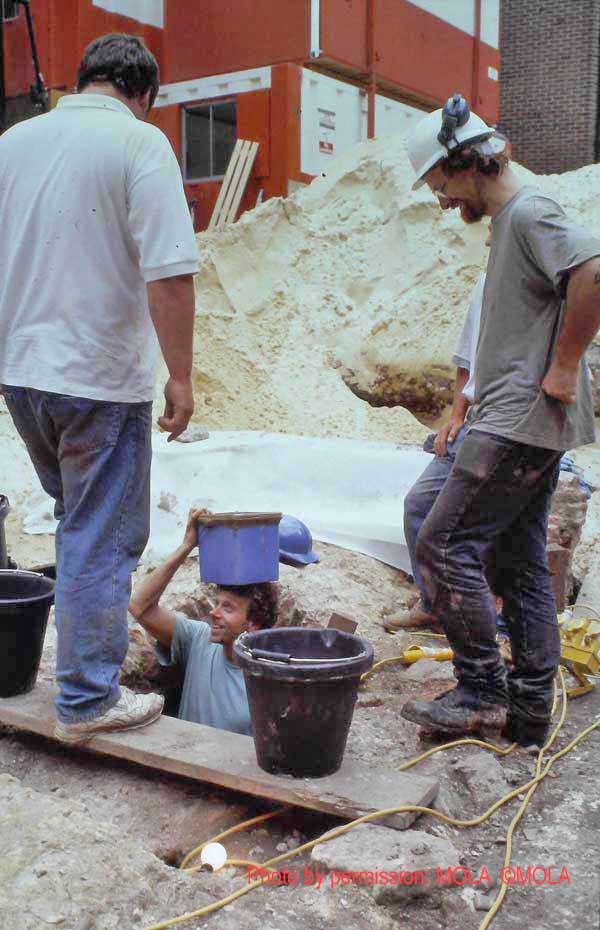 Going underground: two enter the culvert, only one was to emerge. 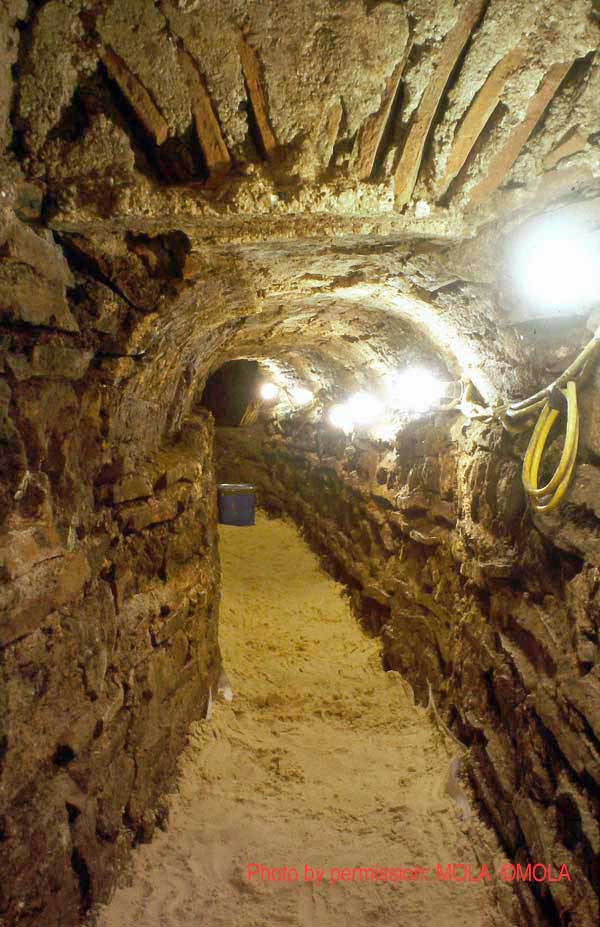 The time capsule in place in the culvert, the stygian darkness beyond, marks the entry into the unexcavated south end of the structure, which Duncan Lees crawled into (complete with prism, torch and dead canary in cage). 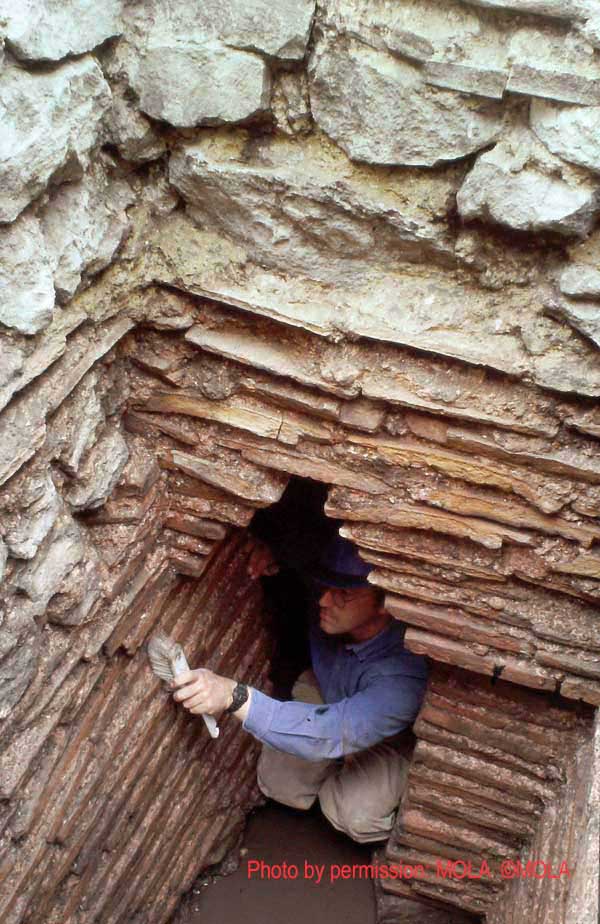 Andy Daykin in the entranceway into the shorter north end of the culvert, from the square access or drop shaft. 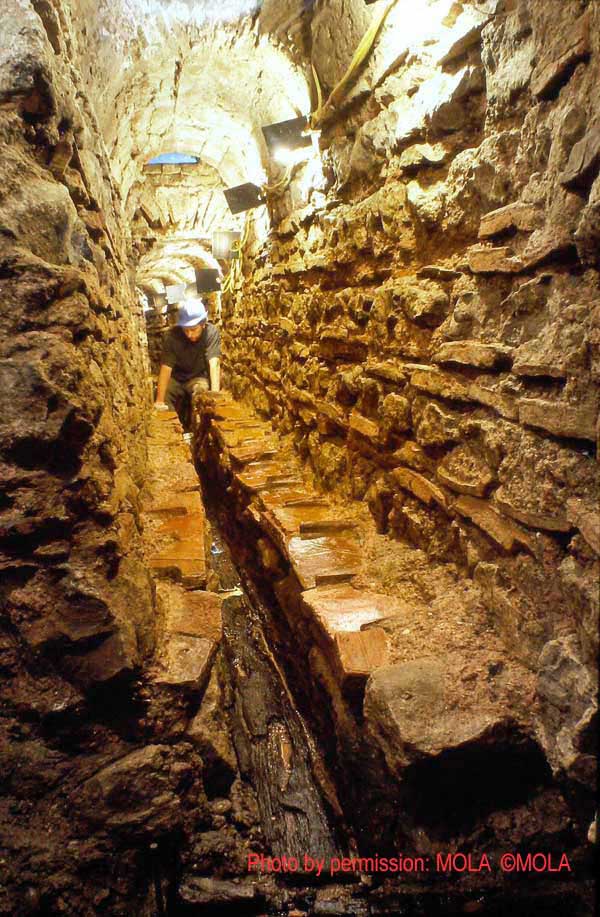 Wider working view of Ian Blair in the longer south end of the culvert.

Addendum: A few years later, I was fortunate enough to work at the fantastic Roman coastal site of Leptis Magna in Libya, where beneath an extant paved courtyard, we discovered two intact subterranean cisterns built to collect and store water. The structures were large enough to comfortably walk around in, but most fantastic of all were the handprints left on the plaster rendered walls (not dissimilar to those seen in prehistoric rock art) by the last people to clean out the wet silt from the floor of the cistern. Whilst all that we seek to salvage, record, and ultimately interpret as archaeologists, was once the product of human enterprise, for me, that connection comes into sharp focus when confronted with something as evocative as a daubed hand print on a wall, or a fingerprint of a potter left whilst applying a strap handle to a vessel: small echoes of humanity that reverberate across the centuries.